It is a peculiarity of India that a system exists whereby the Hindu community have no control of their temples. This has been going on for around 70 years and the end is not in sight yet.

How did it happen?  This short film shows you the sequence of events. 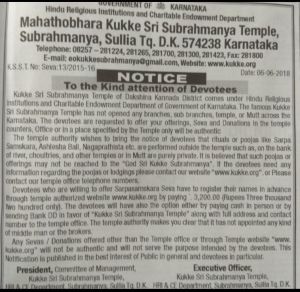 The Brahmins who work in the temple are paid around 700 Rs per month or so at most. (actually HRCE records it at far less which indeed may be the case) So one cannot fault them for trying to make enough money to make ends meet. This is the reason why temple priests try to do private pujas and make a little money on the side.

However, the reason that the Govt and the judiciary have been able to enforce this control of Hindu temples for so long is because of a false narrative which has been fed to the public at large especially courtesy Bollywood (remember that huge fat Brahmin priest in every film you saw? It’s in your subconscious and you won’t be able to shake it off easily).

In fact, although Bollywood films typically show specifically Brahmins and other Jatis working in temples to be crooked and also quite rich (and fat), you will find that in reality, they typically (with few exceptions) are living in squalid poverty and that their only wealth is their knowledge of Agama Shastra, Sanskrit and the Vedas… the situation of quite a few temple priests in these temples is desperate… and heavens help them if they fall ill: death is the only way out.

You will find that the Govt does not want Brahmins who are learned in the Agama Shastra to pursue any means of making money and rise above the poverty line. More importantly, if Brahmins start making a little bit of money doing pujas outside the temple, then how will the Govt executives who earn a lot of money for doing almost nothing and of course …. control the temple…… be paid? This is the sad reality of Hindu temples today and you are likely to find that in a few years there won’t be any Hindu priest who will dedicate his life to the service of Hindus because lets face it, which fool would want a lifetime of penury?

Is it this penury which Fadnavis (who BTW I have praised elsewhere for his Jalyukta Shiver schemes) wants to enforce on the priests and other workers of the Shani Shingnapur temple soon…? Well, we have to wait and see, these politicians simply don’t get it and for Hindu purposes all that will matter is to launch legal challenges to these hare brained schemes.

In summary, although the narrative propagated using the power of the media, Bollywood, the judiciary and the executive for 70 years is that of crooked and wealthy temple priests, the reality is desperate. You won’t find this either in the NYT, nor in the WaPo and certainly not in the news in India. This doesn’t deserve any attention as the media narrative against Hindus and especially Brahmins is driven to the hilt in secular India. Besides, to paraphrase one of my friend’s thoughts on the matter: “What the hell does that foolish Brahmin achieve anyway by sitting on his ass the whole day meditating on those stupid mantras… I can’t even understand them… its not cool you know”

Lets hope that temple priests survive, your temples won’t run without them.

To read my blog on Astronomy and Mathematics in ancient India, do read,

A link to MumbaiGirl’s blog on filmmaking:

A link to the well known blog on False Flag/ Selective Intolerance:

This site uses Akismet to reduce spam. Learn how your comment data is processed.